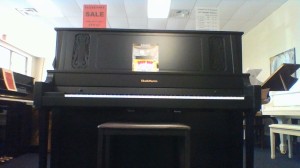 I recently tuned this new Baldwin full sized upright piano. The Baldwin Piano co. is now owned by Gibson Guitar Corp. since 2001. The Baldwin series pianos are manufactured in China with attention to detail by Gibson. The hammers are produced under high tension wrapping-press technology using Royal George hammer felt. The hammer core is Hornbeam imported from Europe. The strings are Roslau from Germany, the soundboard is spruce, the bridge hard maple, and the pin block 17 layer hard maple. As you can see, Gibson uses only the highest quality parts in their pianos. Gibson also uses the Accu-Just Hitchpins developed and patented by Baldwin. The bass section has a deep rich tone. The mid-section and treble section are pleasingly mellow, with just enough of a bright tone to balance the overall sound of the piano. I was able to do a very accurate tuning due to the extreme length of the strings and lack of built in inharmonicity. On a scale of 1-10 this piano is definitely a 10. I highly recommend it! This piano is for sale for the bargain price of only $5999.00